Technology from my life – before beginning school . . .

How many do you recognize and know?

No rotary dial for this phone.  It was a party line phone that hung on the wall in our living room.  One phone for the entire house and family that was attached to the wall.  And you had to listen for your “ring”!

My parents still had a party line in 2005.  Two couples still on the line with neither household willing to pay the cost of a private line. That last portable phone on the farm included a charging base and an answering machine. 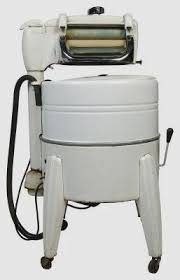 The wringer washer was dangerous.  Your arm could get caught in the rollers.  I remember running cloth diapers and sheets through the rollers . . . it seemed like hours!  Monday was traditionally wash day and this machine was accompanied by tubs of rinse water before clothes went on the line outside to dry.

Our first modern “washer” was purchased in 1970 when we moved into our new house. Goodbye rollers and rinse tubs full of water!  Goodby  Monday wash day!  Any day could now be wash day! 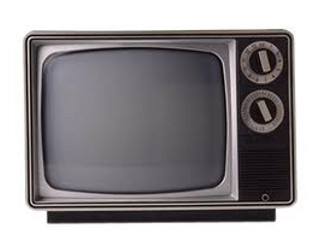 The television was black and white and the picture was black and white. We had three channels.  The remote control was one of the  kids who got up and physically changed the channel.  We watched Lawrence Welk on Saturday night and Bonanza and Ed Sullivan on Sunday nights.  There was no tv watching after school or during the week nights.

The black and white TV was replaced in 1970 when we moved into the new house – a console color TV was part of our family Christmas gift. No cable, no satellite, no NetFlix, no VCR!

I remember this being stored in the basement of our house in later years.  It was also replaced by a stereo console in a cabinet with green velvet under wooden trim. . . 1970 Christmas gift as well!  The stereo also housed a radio that could make the house shake when the bass volume was high! 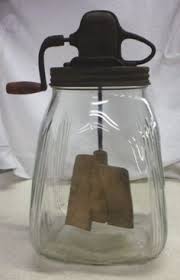 The butter churn was the number one tool that I remember using on a weekly basis.   I would beg to churn butter each week.  I don’t remember what the alternative was, but churning butter meant that “baking” came next.  Yep!  We milked cows, ran a home separator to separate the cream from the milk, sold cream in a cream can and then also peeled the cream off the home pasteurized gallon of milk daily.  By the end of the week there was enough golden yellow cream to make butter.  Butter that went into cookies –  soft and melt in your mouth cookies.  Oatmeal raisin freezer cookies that were rolled up in waxed paper waiting to be sliced and baked.

I believe that Mom still has the butter churn.  It may have marbles in the bottom. It’s an antique so it’s welcome to hang around for a bit. .  . a tool to be admired.

What “technology” do you remember from your childhood that might be considered “pre-historic” today?

What memories are attached to those pieces of technology?

Process/Goals:  During drive time yesterday  I continued to think about the “Timeless” post  and wondered how else I could use an idea about how some household items have changed.  .  . not just in size but in terms of materials composition and even purposes of use!  I started typing some ideas, grabbed photos from Google images, numbered in blue.  And then I had the bright idea to add “the rest of the story” in italics . . . and right justified to set them off. Added categories, tags, proofed, and the #SOL16 to end the March Challenge which did not exist when I was a child!

And to dream of the devices used for this post that were not YET created in the time described in this post: laptop, internet, blogs, Google images, and no March Challenge connecting readers and writers around the world instantly!

Thank you, friends, for reading and commenting during the March Challenge Slice of Life!

I Haven't Learned That Yet

This blog serves to document my path of learning and teaching.

A blog by Kari Yates

Reflections on Leadership and Learning

The Generative Power of Language: Building Literacy Skills One Word at a Time